Using a computer, Google Earth and photos and videos found on the Internet, Globodrome retraces the route described in Jules Verne’s book Around the World in 80 Days. (Globodrome itself is only 69 minutes long.) The idea for the series about people’s material goods, now called Jiadang (Family Stuff), came in 2003 with some photos he took for the magazine Chinese National Geography. But the project didn’t really get under way until three years later, when Huang started travelling around China looking for suitable places and people.

“Most people thought what I was proposing was not normal. When I explained I wanted to set up a photo, that it would involve taking everything out of their house and setting it up outside, that took quite a lot of explaining,” he says.

“But almost all of them, when they realised what I was trying to do, they understood the point.”

Of Bulldozers and Nail Houses 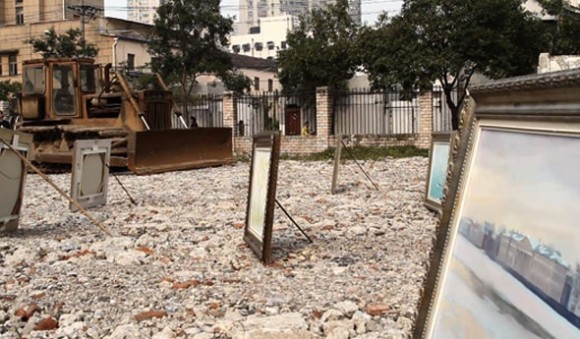 With China’s hectic urbanization and mass demolitions in the news again, P.I.G. is proud to present a special artist collaboration with Russia’s Sergey Balovin.

In his recent Shanghai performance piece entitled “Euthanasia 2”, the artist referenced an important event in Russian art from 1974, when an unauthorized exhibition of nonconformist artists was destroyed by government bulldozers. Read more information on his performance here, and watch the video documenting this site-specific performance below –